From Road Trip to the Road to Recovery 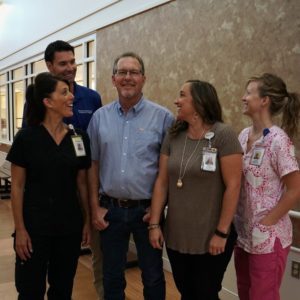 When Guy Brunner took off on a motorcycle trip out west last year with three buddies, he never imagined how the adventure would end…and how HealthSource Saginaw would play a vital role in getting him back on the road with his 2010 Harley Street Glide after his stroke.

Five days into the 10-day trip to the Sturgis Motorcycle Rally , Guy woke up in the morning unable to move. One of his friends heard him thrashing around and flipped on the light. “He took one look at me and knew I had had a stroke in the night,” Guy remembers. After being evaluated at a local hospital near their rental cabin in Sundance, Wyoming, Guy was quickly taken by jet to Sanford Health, a major teaching hospital in Sioux Falls, South Dakota.

“Too much time had passed for me to receive the clot-busting drugs,” Guy explains. Just by chance, a visiting physician giving a lecture at Sanford was able to perform an endovascular procedure call a mechanical thrombectomy to remove the clot in Guy’s brain causing the stroke. The complex procedure isn’t done at many hospitals.

After 8 days in intensive care out west, Guy was ready to be discharged to an acute inpatient rehabilitation facility. He needed intensive physical, occupation, and speech/language therapy to regain the ability to use his left side and to restore memory and problem solving skills. He and his wife wanted to be close to home in Vassar, so they started Googling inpatient rehabilitation facilities here in the Great Lakes Bay Region.

“My wife saw some really great reviews about HealthSource and knew a person or two who received good care there,” Guy explains. “HealthSource sounded like the place for me to be.”

Again Guy was flown by jet back to Michigan, where an awaiting ambulance brought him to HealthSource for two weeks of inpatient therapy and two months of outpatient therapy. “The quality of people at HealthSource is exceptional,” he says. “Really nice. Easy to get along with. The kind who would do anything for you.”

Guy remembers a specific event that particularly touched his heart. “Derek was one of two people in charge of me while I was down in my room. I’m not a big eater so he really watched what I got to eat. He realized one day that the food I got wasn’t to my liking, so he put me in a wheelchair, took me down to the kitchen, and let me pick out whatever I wanted before taking me back to my room. That was really nice.”

Guy also felt that personal touch in the therapy gym. “Therapy was awesome,” he remembers. “Occupational therapy was one of the hardest for me, trying to work small things. My hand and left arm were the last thing to come back. They worked on that pretty hard.”

Physical therapy was “fun” because Guy’s team of therapists “switched it up” every time.
Speech & language pathology, what Guy calls “mind therapy,” helped him in many ways, including apps to use on his phone for memory building activities and games.

These three disciplines, over the course of just a few months, gave Guy the ability to go back and do his job again as a kitchen designer at Vassar Building Center. His bosses there were flexible in allowing him to work his way back from part- to full-time. He also got back on his bike, initially riding around his house until he was brave enough to go out on the road.

“HealthSource was extremely important in my comeback,” he says. “They gave me the care, the motivation, and the ability to come back from a stroke.”