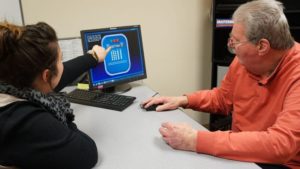 Just six words, but one powerful reason Robert Cook is singing the praises of HealthSource Saginaw and its leading medical rehabilitation experts and facilities.

Robert suffered complications during a heart procedure that caused bleeding in his brain. A surgeon had to perform emergency brain surgery to repair the bleeding vessel. Robert thankfully lived through the serious crisis, but required intensive rehabilitation afterward.

He arrived at HealthSource wearing a protective helmet with his scalp plate removed. He couldn’t walk, talk or hold his head up. His entire left side was affected.

During that time, he choked on a steak while eating out at a local restaurant. A nurse from St. Mary’s of Michigan happened to be dining in the restaurant and jumped into action to save Robert. Her heroics were highlighted on WNEM TV-5. Robert’s seven broken ribs and swallowing issues landed him back at HealthSource for more rehabilitation.

“It’s as if God put a bunch of angels on earth to help me,” he reflects. “The people here at HealthSource do amazing work. They treated me like a human being with real compassion. And they were tough on me at the same time because they wanted me to get better.”

Prior to his health problems, Robert was a fine art painter. During his stay at HealthSource, to show his appreciation, he gave away some of his paintings to nurses and certified nursing aides who helped him through his medical and rehabilitation challenges.

Back to painting again and playing bridge, Robert says, “I got good rehab at HealthSource. They are good people. They’ll do anything for you.”